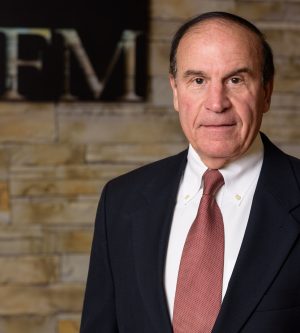 In his 49-year legal career, Mr. Tibbals has represented institutional clients including the FDIC, RTC, National Banks and Savings & Loans and NYSE/NASDAQ corporations. However, his passion is representing the business and personal needs of entrepreneurs and their families.

He strongly believes that it is necessary to understand the clients’ underlying business and personal goals in order to add value through legal services.

Mr. Tibbals has represented dozens of trusts and estates as counsel, trustee and executor.

Additionally, he has been lead counsel in dozens of mergers and acquisitions and was appointed to serve as Condemnation Commissioner for renovation of Dallas Central Expressway.

During his career, he has been lead counsel in state and federal courts, including United States Fifth and Eleventh federal circuit courts, Texas Courts of Appeals and in the Texas Supreme Court, also briefing applications to the United States Supreme Court; has won dozens of jury verdicts; at least on in excess of $5 Million and was lead counsel in the $120,000,000 Dallas Infomart litigation.

Mr. Tibbals is active in the community, serving as President or on the Board of Directors on professional, civic, educational and church boards and as president of several foundations and professional organizations including Board of Directors; Dallas Mortgage Bankers Association; Board of Advisors, Baylor Law Alumni Association; The DeBusk Foundation; President, Wylie ISD Education Foundation; President, Board of Trustees, Park Cities Historic & Preservation Society; HP Community League; and HPUMC.

Mike and his wife, Bunny, are proud to have created and founded the Tibbals Endowed Legal Scholarship at Baylor University School of Law and as Sponsors of “The Closer” Baylor’s National Transactional Law Competition.

Mr. Tibbals has authorized real estate seminar and law review articles and has been lead counsel for his client in more than 20 reported or appellate cases including: